A Wrinkle in Time by Madeleine L’Engle 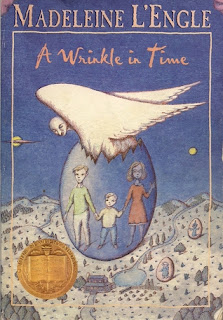 
My Synopsis:
Meg Murry had a lot going on in her life. School life wasn’t good, despite having scientist parents she was on the verge of being held back. She was bullied about her strange little brother who everyone thought was stupid and mute, but in fact was the opposite. Her Father has also been gone a long time on some secret mission for the government.
With the help of Mrs Whatsit, Mrs Who and Mrs Which, Meg ad her youngest brother Charles Wallace set off to find her father.

Why I picked this book up:
I have heard so many good reviews of this book, and sometimes I just love a children’s book. This one had time travel in which I have been enjoying lately.

Did it live up to my expectations?
Not really, at first I it all just seemed a bit too strange to me. There wasn’t really much time travel, more travel through space.

What I thought:
I didn’t really connected with the main character Meg, and the others I never actually felt as though they were real, especially Charles Wallace, which was a bit of a problem.
I think the story line was okay, but not a lot happened for a while and then felt rushed during the second half. I liked the planet of Camazotz (well not liked but thought it was interesting) and would have liked to know more about it and the people in it. The other planets just seemed like page fillers to me.
I also didn’t realise it had such religious undertones, and not being religious, this but me off slightly.

How it stood as part of a series:
Well the main story line was wrapped up by the end, and nothing really made me want to carry on reading the series, it reads fine alone. I will continue the series, but only because I have them, if I didn’t I wouldn’t have bothered.

Up next to be reviewed:
Dash & Lily's Book of Dares