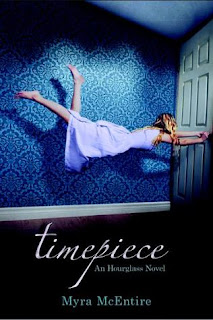 My Synopsis:
Timepiece picks up right where Hourglass left off, with one exception, Kaleb is now the view point character. Kaleb and the other members of Hourglass have started seeing rips, not only that, they are also getting bigger. Then a mysterious man calling himself Poe appears, telling Kaleb that the space time continuum is compromised, and that they need to find Jack Landers. The members of the Hourglass pull together to try and find Jack Landers and figure out what is going on.

Why I picked this book up:

I loved the first book, so was hoping this would live up to it.

Did it live up to my expectations:
Yes, it lived up to the first book, I actually preferred it.

I loved getting to know Kaleb a bit better, finding out the reasons behind his actions. I also thought the romance between him and Lily was much more realistic than the one between Michael and Emerson, two people slowly getting to know each other without any sparks and whistles.
The storyline in this one was much more involved than Hourglass, and moved along a lot quicker. I also like the fact that the other characters were more involved.


How did it stand as part of the series:
Well it followed straight on from Hourglass, so no problem there. Enough questions were answered at the end to make you feel satisfied, but enough left open to make you want the next one. (As soon as possible please!)

Email ThisBlogThis!Share to TwitterShare to FacebookShare to Pinterest
Labels: hourglass, time travel, ya