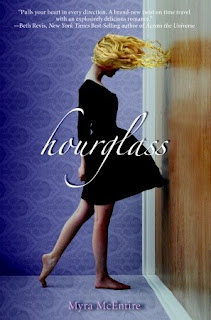 My Synopsis:
Seventeen year old Emerson Cole has been seeing strange hallucinations from the past since just before her parents died. No amounts of consultants that her brother hires can help, until maybe Michael Weaver. The only problem is, Emerson is immediately attracted to him. There are things he is not telling her, things he seems to be hiding, and a strange new man keeps turning up in her bedroom. What is Michael hiding, what does the strange man want, and can Emerson control her attraction to Michael.

Why I picked this book up:
I loved the cover and the premise sounded interesting enough to try.

What I thought:
Well the book had me hooked from the start with lovely language, “My small Southern hometown is beautiful in the haunting way an aging debutante is beautiful.” Who wouldn’t fall in love with a sentence like that? A few paragraphs later we are treated to this, “I reached our building only to find a wide-eyed Southern belle wearing a Civil War-era dress blocking the front door.” And a little later, “Sighing, I stuck my hand through her stomach to turn the knob, meeting no resistance. I rolled my eyes as she gasped, fluttered her eyelashes, and disappeared in a puff of air.” I was already in love and couldn’t put the book down. This book had everything I could want, mystery, romance, sci-fi elements (without being full blown sci-fi), and great characters. Emerson is a great female heroine, she can handle herself, but at the same time is unsure of herself, turns to people when she needs it, but doesn’t rely on anyone, and has a great supporting net of family/friends. The only downfall in the book was the attraction between Michael and Emerson, it was love at first sight for Emerson, sparks and what-not, all seemed a bit over the top, and after barely knowing him she already claimed him as hers. I prefer my romance with a bit more substance. Overall a great read, and at least for me, a quick one, can’t wait for the next one in the series (and lucky for me I don’t have to, review coming up soon!)

Did it Live Up To My Expectations:
No, it exceeded them, writing was just as beautiful as the cover, and the premise was more than interesting.

Read if:
You like light sci-fi/fantasy, romances with bells, whistles and sparks, YA, I think dystopian fans would like this too. Basically read if you like YA that isn’t realistic YA. Also fans of “The Time Travellers Wife” by Audrey Niffenegger and “When You Reach Me” by Rebecca Stead may like this.
Posted by Amz at 14:39

Email ThisBlogThis!Share to TwitterShare to FacebookShare to Pinterest
Labels: hourglass, time travel, ya