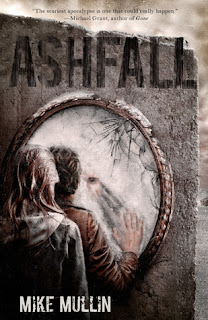 My Synopsis:
Fifteen year old Alex was glad to be left behind while the rest of his family went to visit his uncle in Warren, that is until something crashed through the roof of his house and set the place alight. Alex later finds out that the super volcano under Yellowstone has erupted. After many hours of endless explosion sounds and complete darkness, nothing was working, no electric, no gas, and no water. Among people going crazy Alex decides he needs to go to Warren and find his family. Alex sets off skiing across the ash that covers everything with little supplies.

Why I picked this book up:
I love YA dystopian books, and this one sounded good.

Did it live up to my expectations?
I didn’t really have many expectations from this, so yes it exceeded any I did have.

What I thought:
One of the things I loved about this book is that it was so real. It’s not set in some future world that we have to learn about. It’s set here and now, and is about something that could realistically happen (okay so the author tells me at the end that it’s not likely to happen in our lifetime, but I didn’t realise that during reading.) This makes it so much easier to get into and imagine. It also makes it scary, can you imagine hours of load explosions and total darkness, that alone is enough to scare me (that would make most people crazy as it is.) then add in the fact that all communication is down, food is running out and water is running out.
Alex is a really good character, I loved the fact that he was a bit of a geek and that he just hid at first when his house started falling about around him, made him seem real rather than some superhero that goes out guns blazing, so to speak.
Darla I really connected with, she was strong, smart and sarcastic, just the kind of girl I’d like to be.
Some of the other characters didn’t quite feel as real, but it wasn’t much of a problem.
The romance part felt quite real, and romance is always an added bonus for me.
There is quite a bit of violence, but then I imagine there would be if this happened (when it happens?) so it didn’t feel out of place at all.
There were times it got a bit slow, but overall I really enjoyed this book.

How it stood as part of a series:
It left enough open at the end to give the series somewhere else to go, but the real reason to carry on reading is the characters, you really want to know more about them. I will definitely be continuing this series.

Read if:
You like dystopian or post-apocalyptic novels, you are interested in volcanoes and there aftermath. You enjoyed the movie, “The Day After Tomorrow.”

Up next for review:
Ashen Winter by Mike Mullin

Email ThisBlogThis!Share to TwitterShare to FacebookShare to Pinterest
Labels: dystopian, post-apocalyptic, ya