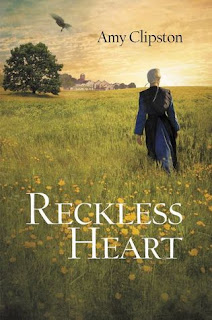 
My Synopsis:
16 year old Amish Lydia has a younger sister who is very ill, while coping with this, she has to run her household, look  after her other 2 younger siblings and work 2 jobs while her mum takes young Ruthie for treatments. She befriends a young “Englisher” boy, which is frowned upon by her community.

Why I picked this book up:
I like reading about how people react when they have ill members of family, I also thought it would be interesting to learn about the Amish as I knew nothing about them. I also expected the friendship with the “Englisher” to turn into a forbidden romance.

Did it live up to my expectations:
Not really, the friendship was just that, and made clear of that fact throughout the book. I didn’t really learn much about the Amish as the author seemed to expect me to know so much, and we were constantly told how Lydia was coping without really being shown, nor did we see much of Ruthie and how it was for her.

What I thought:
This book was very slow going, it seemed as though nothing much as happening, as I said above, we were told over and over how Lydia wasn’t coping, but not really shown anything, towards the end of the book she did start acting out, but it seemed a bit too late, especially after we see her really act out at the beginning, there was just nothing in between.
We were also given a glossary at the front of the book explaining some of the Amish/German words, the problem with this was the choice of words used, instead of just picking common words that would be easy to guess, e.g. Mamm/Mum, Dat/Dad and ya/yes, we were given odd words and whole sentences that I couldn’t understand why they were chosen, and just added to confusion and interruption as I constantly had to go back to the glossary.
We were also given a family a tree at the beginning of the book, this didn’t show up properly on my version on the kindle, although I didn’t need it, it would have been a nice inclusion.
Maybe I would have enjoyed it more if I was Amish, or even Christian?

How did it stand as part of the series:
It is part of the Kauffman Amish Bakery series, I have not read any of the others, and it was not needed to understand this book, it works fine as a stand-alone.

Email ThisBlogThis!Share to TwitterShare to FacebookShare to Pinterest
Labels: amish, ya