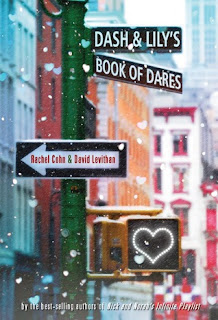 My Synopsis:
Lily’s parents have gone away for Christmas, leaving her with her older brother, who is far too busy with his new boyfriend to pay attention to her. So they come with a plan to find her a boyfriend. A series of clues/dares in a red notebook, hidden next to her favourite book in a book store.
Dash finds the notebook, and follows the clues, at least until he is told to put the notebook for the next person, instead he decides to write clues of his own. The book then follows these two through the notebook and beyond.

Why I picked this book up:
I love the idea of two people communicating without having met, especially the fact that it isn’t just communicating, its clues and dares. I loved David Levithan’s “The Lover’s Dictionary” and have read “Nick and Norah’s Infinite Playlist” and enjoyed it. I also love a bit YA romance and Christmas.

Did it live up to my expectations:
There were parts that did, and parts that didn’t. It wasn’t as good as “The Lover’s Dictionary”, but was better than “Nick and Norah’s Infinite Playlist”. The YA romance felt real which was good, but I didn’t connect with Lily the way I did with Dash, and at times it felt a bit too unrealistic/over-the-top.

What I thought:
Lily was quite annoying and I constantly wanted to tell her to grow up, the same with her brother. Dash however was completely different, sometimes I just wanted to tell him to be a kid a bit more, but mostly I just fell for him. At first I found it hard to understand what he was on about some of the time, but once I got past that I really just wanted to hug him. You can tell he’s hurting without being told how he feels all the time, whereas Lily we constantly told how she felt, but it never felt real, or that she felt that way for any particular reason.
They did however both grow throughout the book, and Lily even started to grow on me a bit.
I do have to say though, despite everything I’ve said here, I still loved this book, as I said before the romance felt real, Dash felt very real and it as a nice pick me up, that expanded my vocabulary in the mean time!
In fact, it's the kind of thing I used to wish would happen to me, I just never had the guts to do something like that.

Read if:
You liked “Nick and Norah’s Infinite Playlist”, you liked the way the characters talked in the TV series “Dawson’s Creek”, you like expanding your vocabulary, you like a realistic YA romance.

Up next to be reviewed:
Ashfall by Mike Mullin

Email ThisBlogThis!Share to TwitterShare to FacebookShare to Pinterest
Labels: books, reading, ya