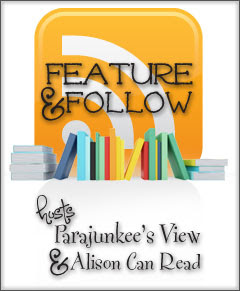 The Feature & Follow is hosted by TWO hosts, Parajunkee of Parajunkee's View and Alison of Alison Can Read.

Todays question is:
Happy Father’s Day! Who is your favorite dad character in a book and why?

My favourite father character is Brian from "My Sister's Keeper" by Jodi Picoult.
Even though he is struggling through his eldest daughter's illness, he is still there for his youngest daughter, recognises his mistakes and tries to correct them, and stands by his daughter when she makes a difficult choice.
A quote from Brian:

"There were no stars that night, what with all the rain clouds. And maybe because of that, when Anna arrived I said to Sara, 'Let's name her Andromeda. Anna, for short.'
'Andromeda?' she said. 'Like the sci-fi book?'
'Like the princess,' I corrected. I caught her eye over the tiny horizon of our daughter's head. 'In the sky,' I explained, 'she's between her mother and her father.' "