Review: Tell Me a Secret by Holly Cupala 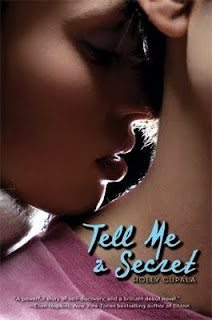 My Synopsis:
Miranda, (or Rand or Mandy) has been having trouble coping with her sister’s death. She had always looked up to her sister and even told her she wanted to be just like her. The problem was her sister had been the trouble maker while she had been the good sister. Her parents will not talk about Xanda and have taken away any pictures of her, this makes it hard for Mandy to really know who her sister was, so she tries to find out for herself, be more like her in the hope of getting some answers. So she ditches her best friend in favour of the new bad girl, gets a boyfriend and starts partying. Then she misses 2 periods.

Why I picked this book up:
I originally had it as a free audio book, but found I just can’t get along with audio, so got the book instead as it sounded really interesting.

What I thought:
When I think back about this book, I remember it as more of a story about a girl dealing with grief over her sister, not so much about teenage pregnancy. This for me is a good thing, it means I wasn’t preached against the horrors of teen pregnancy, but at the same time we were shown how hard this was for Mandy. There were times when I wanted to yell at Mandy to grow up, for example, the first time she sees Kamram with Delaney she freaks out, at the time they were doing nothing wrong and had done nothing up to that point, so why was her reaction so strong? I also thought at times she was a bit of a spoilt brat, she thinks it was unfair that her parents wouldn’t support her and the baby and look after it while she goes to college, that’s her job not theirs. I loved the girls’ dad, he really loved his daughters and tried so hard for the family, but the mother I just wanted to shoot, she has some serious issues. Kamran was an ok character, there are times when you can see that he cares for Mandy and just got caught up in all the shock, but I would have thought he’d have been able to see through Delaney sooner. I thought Shelly was a great character and would love to hear more of her story.
The storyline is what really captured me with this book, there is so much to it, you have lies, secrets, teen pregnancy, death, family issues, friendship, the list just goes on and on, but it’s not in your face either.
Overall I liked this book and would read another by Holly Cupala

My favourite quote/s from the book:
“Keep your eyes on the future, because that's where the answers are. It's where the hope is.”

Read if:
You liked “Twenty Boy Summer” by Sarah Ockler, both deal with grief and secrets.

Up next for review:
The Icarus Project by Laura Quimby
Posted by Amz at 04:38